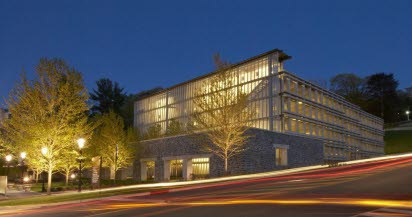 A design-build approach that reused steel forms from an award-winning project resulted in the 315-space Lehigh University Alumni Parking Garage in four to six months less time than typical construction. The form design was recognized with a PCI Design Award in 2002 and again in 2007 when it was repurposed for this project.

The five-level, 104,000 square foot garage for university faculty features 10- by 30-foot precast concrete elements that incorporate slender precast concrete columns and spandrel beams. The structural design eliminated tall, heavy spandrels that are traditionally associated with parking structures, replacing them with an open, lightweight concrete latticework that provides both exciting form and efficient function. The panels' slender columns correspond individually to the 7-foot 6-inch span of the 15-foot-wide structural double tee stems. In addition to bringing in light and providing an open, airy feel, the exterior lattice system blocks headlight beams from reaching into the neighborhood.

In a recent and unconventional interpretation of this concept, the New Brunswick Development Corporation (Devco) has completed Gateway Transit Village, a mixed-use, transit-oriented design consisting of a 24-story building and a new pedestrian walkway directly adjacent to a NJ Transit/Amtrak station. Located in the heart of downtown New Brunswick across from the Rutgers University campus, the new $150 million, 632,000-square-foot structure is the tallest parking garage and building in the city. A precast parking structure from High Concrete Group LLC forms its core.

Built as part of an ongoing revitalization effort, the new complex is intended to help bring renewed life to a site that is vital to the city, but that has been under-utilized for many years. With views of the Raritan River, the apartments and condos in the tower are targeted to attract people who already live and work in New Brunswick. Twenty percent of the units are set aside for moderate- and low-income owners.

The project is unconventional in several ways. "Gateway is the most urbanly dense transit village in New Jersey," notes David J. Stuart, project manager for New York City-based Meltzer Mandl Architects. "Everything that’s normally incorporated into a transit village has been combined into a single structure."

"Also, precast concrete parking garages are not typically designed to support taller and more complex structures above them; they are usually stand-alone buildings. To place a 14-story building on top of a garage is daring structural engineering," says Stuart.

Gateway Transit Village consists of a 10-story precast parking garage with 697 parking spaces, topped by a 14-story steel-frame and hollowcore residential tower containing 150 apartments and 42 condos. The structure is wrapped by 120,000 square feet of offices and a series of street-level commercial spaces for tenants, including the Barnes & Noble College Bookstore for Rutgers and offices for the New Brunswick Parking Authority and the Rutgers University Press.

Stuart notes that Gateway Transit Village doesn’t relate to its context as much as redefine it. "A typical approach would be to hide the parking garage, and disguise the precast," says Stuart. "At first we considered thin brick, to match other parts of the structure. But we decided that we wanted an exposed concrete aesthetic for the podium, to let concrete be concrete, and to show its inherent nature. Precast concrete can be quite elegant, minimalist. It was economical, fast, and gave us pleasing aesthetics."

The majority of the garage was cast in a standard High Concrete Group buff architectural mix and finished with a light sandblast. Simple reveals set up a rectangular pattern that brings scale to the horizontal spandrels and complements the openings between them on the way up. Spandrels at the top are finished with a small cornice.

The parking garage required 24-foot and 36-foot spacing between the support walls to optimize the parking spaces and 12’-wide precast double tees. The residential tower called for a different supporting grid, which had to have its column lines aligned with the garage support walls via 10-inch-thick hollowcore plank spanning up to 36 feet.

"This is a good use of precast," says J. Benji Alper, PE of engineering firm Severud Associates’ New York office. "While the precast garage is only 10 stories, the overall structure still stands at 24 stories tall, requiring the precast walls to resist the forces for the full lateral and gravity loads of the 24-story building." He discusses the approach in the Structure Magazine article,"Integration of Diverse Structural Systems and Design Delegation in a Mixed Use Space."

Alper notes that communication was critical in the project. "Immediately after the contract award, weekly meetings were conducted with the entire design team which included members from the precast manufacturer’s engineers, the structural engineer, the architect, the parking consultant, the owner, and the general contractor. Other trades, including the steel fabricator, the steel detailer, and the erector, also would often attend. The meetings were a key part of an iterative design process between Severud and High Concrete Group." 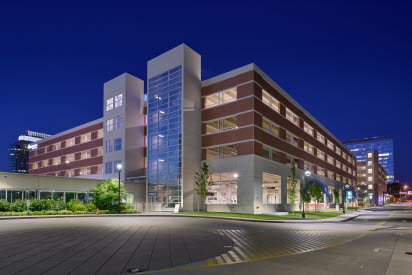 As the use of a structure changes over time, the facilities themselves must adapt. Sometimes, this means fully demolishing an existing structure to accommodate the evolving needs of its tenants. This was the case at a regional medical center, where plans were made to replace a parking garage to increase capacity and functionality. The project would feature six levels and a total of 851 parking spaces along with the construction of medical offices within the new structure. The medical center also wanted to design their new garage with flat levels so patients with mobility issues could easily access the main buildings without having to navigate ramps or stairs. It was crucial to avoid disruption of hospital access for employees and patients during construction. The bulk of this project also happened to take place during the peak of a pandemic, meaning that the hospital had higher traffic and that it was even more important to minimize disruption of the medical center’s activity.

Inspired by the rolling hills in Pennsylvania, the eye-catching waving spandrels are the first element to greet you as you drive onto the health campus and the last you pass as you leave. Being in such prime real estate, the owners did not want this to be an ordinary parking garage. The Architects took on the challenge with inspiration from the land around them and created a total precast concrete marvel with 1,235 parking spaces with room to expand as needed.

Once bustling with retail business and pedestrian traffic, the City of Lancaster, PA is working toward rebuilding a vital and vibrant downtown. Designed with an intention to stimulate the Lancaster economy with much-needed commuter and transient parking and 15,000 square feet of retail space on two floors, the 185,000-square-foot Queen Street Station Parking Garage complements the city’s historic streetscapes and creates a pedestrian-friendly aesthetic. 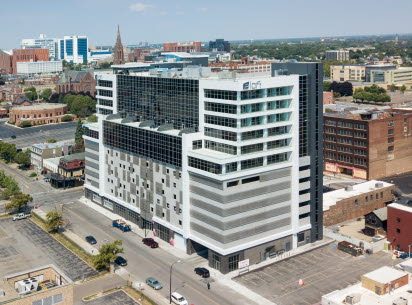 Perched up above a seemly 6-story precast podium parking garage stands a hotel and apartments that rely on the durability of precast to provide key functionality to the structure. While the garage is an open design for natural ventilation, the designers observe a balance using large wall panels with a square reveal to create the visual of sectioned windows on a standard building. Being able to factor in the finished material by augmenting another material elevated off the precast panels was a benefit to using precast concrete on this project to create the feel of a cohesive building and not a parking garage.

The precast columns stream down through the 380 car parking garage into the ground level to structurally support the garage as well as the steel structure placed above the garage. The structural capacity and durability precast brings are essential to the harsh weather climate that this structure will come into play with.

The first level of structural elements complements the functionality of the building ground level by acting as a ceiling that completely seals an operational facilities portion of the hotel and several retail/food services tenants. A waterproof sealant was applied to the structural elements on the first precast level to keep the moisture out.