The playful yet sophisticated use of a herringbone pattern results in a standout, bold style that NBBJ wanted to capture on this civic asset in the city’s central open space.

Continuing in the style of the black façade on the top eleven stories, the white panels at ground level begin with linear lines and gradually fade to a smooth finish. The transition from a smooth finish to a heavily textured panel gives the ground level a clean ordered look in contrast to the beauty of the organized chaos above. The white mix used as the deep contrast is captured throughout the façade from the balconies to the back of the building’s recessed design were all achieved using precast concrete.

Scattered among the levels are cantilever balcony decks protruding straight out from the structure of the building. No support brackets or elements are needed for these precast slabs due to the design, therefore providing the visual of a floating deck. The severe contrast of the two colors helps deliver the architect's design intent.

The result of the refined material palette and texture of the pattern used is one of the unique features of the building. The custom formwork makes the surface appear as if it is changing throughout the day due to the shadow with the sun. Depending on the angle, the layout gives off an impression where sections appear as different shades of a black concrete mix, when in fact, it’s not.

View 80 on the Commons 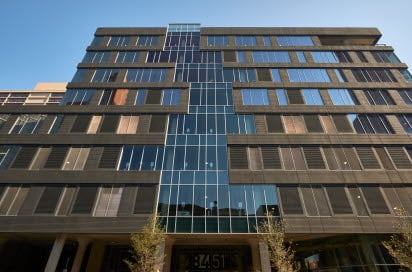 The new mixed-use structure at 5th & Race Street in Cincinnati, Ohio, gives visitors the impression that they can see right through the building. Designers of the 280,000 ft² facility, elegantly merged broad windows and precast concrete panels to create a light and elegant building that reflects the blue sky during the day, and golden street lights at night, while giving residents a strong, open space for their offices and retail.

The building, titled 84.51° Centre, includes a 1000-space, four-story parking garage at the base topped by four stories of commercial space. Precast concrete was chosen to achieve the owners’ durability, accelerated timeline, and aesthetic goals, says Glenn Ebersole, P.E., Market Development Manager of High Concrete Group, the precaster on the project. “By using architectural precast panels we were able to provide the dark color and avoid the repetitiveness of patterns while limiting erection time.” The dark color of the precast concrete was created by combining black granite coarse aggregate with black sand in the mix. The panels were acid etched to provide a soft texture, sometimes referred to as sugar cube texture. The acid etch finish also enables the sand to sparkle in the sun, providing glints of light and visual interest to passersby.

“The use of precast to provide ventilation on the garage level helps camouflage the fact that the lower levels of the building are a garage and it creates a unified facade,” says Michael Zensen, Associate Vice President, CannonDesign, one of the judges of the 2016 PCI Awards committee. The horizontal reveal pattern provided the desired modern, industrial look, and random non-symmetrical window openings combined with reveal accents added visual interest. 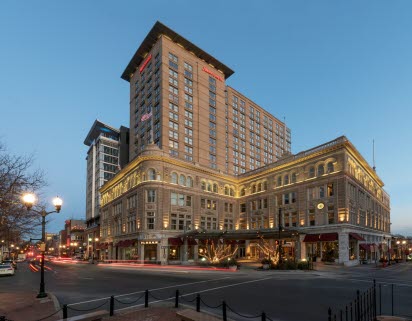 Established in 1718, Lancaster is the oldest inland city in the United States. Its town square can be traced back to 1730 when James Hamilton laid the city out in a traditional grid. Structures with lasting, historical value have been fixtures on the square for years. The central area has always been among the most densely developed parts of the city.

The biggest obstacle consisted of working around the existing structures, many of which would be integrated into the new complex. It severely limited the size of the construction site. Because precast is manufactured off-site and delivered to the job as needed, it was preferable over field-built options that would have required significantly more space.

“Staging was a big issue,” explains Kevin Iddings, general manager of Midwest operations for High Concrete Group. “We developed a regimented schedule that allowed us to ship the precast pieces one at a time as they were needed. It helped avoid a backlog of materials in the field.”

In addition, High worked with the architect to simplify the job as much as possible, eliminating unnecessary pieces and identifying ways to reuse molds, thereby minimizing costs.

Nestling an 18-story hotel and conference center into the historic streetscape of downtown Lancaster wouldn’t be easy, but architect Lane Chapman said she was determined to be respectful of the existing architecture while incorporating the modern amenities expected of a high-end facility.

“The goal was to minimize negative impact on the streetscape,” says Chapman. The impressive façade of the landmark C. Emlan Urban-designed Watt & Shand Department Store was preserved and restored as the new face of the hotel. Blending in with the 1898 limestone façade was paramount. The precast concrete was finished with a buff sandblast finish to complement limestone, and detailed pieces above the windows and doorways throughout the new structure echo its ornate Beaux Arts carvings.

Additionally, the adjacent Federal-style Montgomery House, designed by the architect Stephen Hills, who also designed the first Pennsylvania State Capitol building, as well as the homes of abolitionist Thaddeus Stevens and of African-American landowner Lydia Hamilton Smith were incorporated into the convention center complex.

Because precast concrete is manufactured in a controlled factory environment, the wall panels achieved a level of uniformity unmatched by poured-in-place construction. This includes consistent door and window openings, which eliminated the need for costly fieldwork to correct gaps and irregularities.
View Lancaster County Convention Center
Footer Content