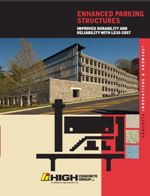 For the owner, a local newspaper publisher, the need to create new parking space in a crowded downtown was complicated by a mandate from the city’s historical commission to build the seven-story garage in conformance to a unique architectural context. The city is one of the nation’s oldest with buildings that predate its incorporation in 1715. Federal, Georgian, Victorian, Beaux Arts, Art Deco and other influences are evident throughout the city core.

Responding to the strictures of the city’s Historical Architectural Review Board and the intentions of the client, the project design team modeled a structure on the eighteenth-century housing nearby. “We wanted to design a parking garage that didn’t look like a parking garage,” says project architect Ross Ansel. “It had to be like the rowhouses -- the same proportions and basic appearance, but seven stories high.”

“We’ve done a good deal of work with structural precast concrete,” says the project architect. “In our opinion, it’s less expensive than other parking garage systems in both initial and life-cycle costs. It made sense to go with the same system we’ve used before.”

A contemporary garage in 1700s context

To achieve this look in the scaled-up garage design, the team chose precast exterior panels. The panels include a 40-40-20 mix of red brick shades with black ironspot stippling to mimic the faces of the nearby residences. Windows are simulated by keystones and aluminum-framed openings.

The architect says buff-colored cast stone inserts, which correspond to the region’s native limestone, were especially important to the visual effect. “They project out beyond the face of the building and create depth,” he said. At the level of pedestrian view, the first floor of the structure departs from the antique design above, with an aluminum curtain wall treatment resembling a retail location.

Technology for economy and green advantages

The workhorse in the project is its complement of 15’-wide CarbonCast® Double Tees. The flanges of the double tees, which make up the driving surfaces of the garage, are reinforced with carbon fiber grid instead of conventional steel mesh. Because CarbonCast is not affected by chlorides, the driving surfaces are far more resistant to corrosion caused by deicers used to keep streets and roads clear during the winter.

CarbonCast double tees are lighter in weight because the carbon fiber grid does not need as much concrete cover to protect it. High used less concrete in forming the members ordinarily used to protect the steel mesh, permitting an 8 percent reduction in weight. At only 3-1/2” thick on most floors, the double tee flanges are half an inch thinner than conventional double tees. On the first floor, where a two-hour fire rating was required, the double tee flanges were 4-3/4” thick. Each double tee spans 60’ and accommodates four spaces.

The garage replaced a surface parking lot on the sloping site. With 405 spaces, the new garage meets parking demand imposed in part by newspaper staff and the opening of a downtown convention center. Challenges for the project team included addressing the site slope, providing stabilization to adjacent streets and properties, and connecting the new building story-by-story to an existing 350-space garage hidden behind it. Cast stone pieces had to fit within precast structural pieces, and attachment hardware for the cast stone had to be concealed.

Ansel cites a string of additional advantages with precast. The wall panels limited the need for onsite trades, especially masons. No scaffolding was required, and site disturbance was minimized – an important detail for this close-quarters urban job site. “Using precast did shorten the site construction phase, probably by about two months,” he notes – a difference that can save money for building owners, or in the case of a paid parking garage, speed revenue generation.

The garage was erected without need for closure of adjacent US Route 222 (South Prince Street); originally it was thought that the garage could not be erected without closing Route 222 for one to two months, but after many meetings with subcontractors and Lancaster City officials, it was determined that the garage could be erected from the east parking lane, eliminating a costly planned detour.